AceMagnetics.com has become the premier magnetic bracelet, copper bracelet and magnetic jewelry online catalog as a result of our commitment to one simple tenet - customer service.
Continue


General Electric announced a new MRI machine this week that can make the the procedure more comfortable and accessible for two segments of patients – the claustrophobic and the obese.

MRI technology, or magnetic resonance imaging, uses a magnetic field to scan a patient and produce internal images of the body. MRIs are normally performed in a narrow tube because the machine's super-conductive magnets need to be as close to the patient as possible in order to preserve image quality. GE's new device, which was designed in the US at the company's Milwaukee, WI and will be manufactured in nearby Waukesha, features a wider table to accomodate patients with a larger build or patients who suffer from claustrophobia without sacrificing image quality. The new devices are in the same price range as normal MRI machine, around $1.5 million.

Read the Milwaukee Journal Sentinel's coverage of the announcement here.

According to a recent report from the Los Angeles Chronicle, engineers at the National High Magnetic Field Laboratory are preparing to launch a new generation of high-field magnets that have the potential to significantly reduce a lab's operating costs and open up an entire new experimental industry for physics research. The biggest success so far in the effort is the collaborative project with SuperPower Inc. to produce a superconducting magnet that requires little to no electricity. The magnet has recently broken two world records for the strength of magnetic fields.

Drew W. Hazelton, principal engineer for HTS applications at SuperPower said, "These new world record achievements are an important indicator of the value provided by SuperPower´s superior performance wire in the area of high field magnetics. We can expect important new developments in magnetics research in the future."

Since the project began over two years ago, it has progressed in leaps and bounds. In the future, it looks to continue its research into the science of magnetics that can potentially change the way we look at physics.

According to a recent press release from ScienceDaily.com, magnetotactic bacteria, the smallest organisms to use a biological compass, are currently undergoing extensive research as scientists look to uncover exactly how they create their cellular magnets. In a study published online in Genome Research, researchers have used genome sequencing to unlock new secrets about these magnetic microbes that could accelerate many research studies in both biotechnology and nanotechnology.

So what makes magnetotactic bacteria different from other forms? The answer is in the air. Magnetotactic bacteria, in order to obtain more ample oxygen, evolved using the Earth's magnetic field to orient itself and swim downward – exactly the direction a microbe must move to locate low oxygen areas in lakes and oceans. Using tiny magnetic crystals as a compass, the bacteria was able to find more oxygen and consequently, sustain life. This development, should it be further researched, could shed light on many more aspects of internal compassing, as well as the development of magnetic forces within various life forms. 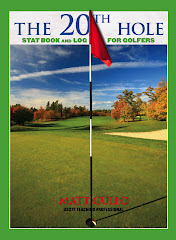 Calling all golf enthusiasts! We've found the perfect blog for you! Over at The20thHole.blogspot.com

you will not only find videos from recent golf tournaments, but commentary on professional golfing strategies and performances on the green. The20thHole.blogspot.com offers its readers a huge variety of golf related news and resourceful links. It's truly a great blog for anyone who enjoys a round of golf every now and again.

The founder of the site, Matt, is a USGTF golf teaching professional at the Every Body Golf School in Virginia. He has been playing golf for over 20 years and has been fortunate enough to release two books on the topic of golf. The “Golf Record Book” allows a golfer to track and record their performance throughout their golfing career while the “Stat Book and Log for Golfers” allows one to log their progress, set goals, and track tips and tricks on the green. You can even read excerpts from these books at http://www.the20thhole.com/. These books would make great gifts for any golfer!

We, at Ace Magnetics, were lucky to have stumbled on such and find, so make sure to stop by The20thHole.blogspot.com and tell Matt we said hello!

According to a recent article in New Scientist, tuberculosis can now be diagnosed in just under 30 minutes, thanks to a new technology that uses magnetic nanoparticles to identify the disease in sputum, even at very low concentrations.

Traditionally, TB is tested by examining bacteria in sputum under a microscope, then sending out samples to a lab for conformation. This involves growing larger colonies of bacteria, which can take weeks, and consequently, delays treatment for many. Not to mention, the extended waiting period can also risk the spread of the disease.

Instead, with this new test, doctors can simply add the sputum to a solution containing nanoparticles with an iron core encased in iron oxide. Each nanoparticle is loaded with antibodies that encourage any TB-causing bacteria in the sputum to bind to it. The new test, which was developed by Ralph Weissleder of Harvard Medical School, offers an alternative to time consuming examinations and testing for physicians in geographic areas that could potentially face a bevy of cases.

If you're a history buff, or just are wondering about the history of magnets and how long the practice of using therapeutic magnets has been around, browse through this time line ranging from the first reported discoveries of magnets to today's therapeutic magnet science.


2500-3000 B.C.The discovery of magnets was first documented around during this time period. There are several reports about how this happened ~ one is that they were discovered in Asia Minor in a land called "Magnesia", where the earth was full of iron oxide which naturally attracted metals to it. The local citizens named that special substance "Magnetite".

2500 B.C. Another report is that there was a young Greek shepherd named Magnes who was climbing Mount Ida. He was wearing sandals with iron nails in them, as was common in his day, and he noticed that it was extremely difficult to lift his feet off the rocky mountainside. Mount Ida was found to contain a high percentage of "Lodestone", which is the first known magnetic material. Lodestone was named "Magnes" after the boy who discovered it and later became known as "magnet".

2000 B.C. Chinese doctors continued the history of magnets - and still are today - by combining magnetic therapy with reflexology and acupuncture.

350 B.C. Aristotle and Plato talked about the benefits of Lodestone in their work.

50 B.C. Cleopatra, the first "celebrity" to use therapeutic magnets, slept on and also wore a Lodestone to keep her skin youthful.

Middle Ages - Doctors used magnets to treat gout, arthritits, poisoning, baldness, to probe and clean wounds and to retrieve arrowheads & other iron-containing objects from the body.

1400's A.D. A Swiss physician named Paraclesus recognized the therapeutic powers of magnets. He wrote medical papers on the benefits of using magnets to reduce inflammation in the body.

1500's Dr. William Gilbert published one of the first books about magnetic therapy. He was also Queen Elizabeth I personal physician, and it is reported that she used magnets as therapy under his direction.

1700's The history of magnets continued in the 18th century when Michael Faraday, the "Founder of Biomagnetics" discovered significant information about magnetic healing, aided by Dr. Mesmer [the father of hypnotism] and Dr. Samuel Hahnemann [the father of homeopathy].

1800's - After the Civil War in the U.S., magnetic devices such as hairbrushes, insoles, salves and clothes were popular.

1905 Dr. Kreft of Germany researched the beneficial effects of magnets on rheumatic disease, sciatica and neuralgia.

1926 Dr Criles studied the impact of magnets on cancer cells.

1936 Albert Davis tested the effects of north and south poles on magnets.

1975 Isamu Masuda of Japan founds Nihon Kenko Zoushin Kenkyukai, the parent company of Nikken Global, one of the world's largest network marketing companies. This company changed the course of the history of magnets when it began its product line with therapeutic magnetic shoe insoles!

1987 The history of magnets was again exploded when The World Health Organization performed a study that showed that there is no adverse reaction when applying magnets to cancer cells.

1990 The University of Hawaii tested magnetic fields on patients with osteoarthritis.

2001 The University of Virginia tested magnetic mattress covers on patients with Fibromyalgia.

2003 Nikken made an endowment of $2 million to the University of California, Irvine Medical Center for a renovated, state-of-the-art facility named the Nikken Imaging Center.

2004 The University of Exeter and Plymouth tested magnetic bracelets on patients with Osteoarthritis.

Clinical research on magnets and their therapeutic value has blossomed in the last 10-15 years! Some of the organizations that are dedicated to this study are:

The National Center for Compementary and Alternative Medicine. NCCAM is a division of the National Institutes of Health, which is the United States' top agency for scientific research on new or alternative technologies.

The Magnetic Health Science Foundation, one of Japan's leading scientific organizations, is dedicated to research in the application of magnetism in clinical studies, diagnosis and treatment.

The Bioelectromagnetics Society is an international group of scientists, physicians and engineers that promotes the exchange of ideas concerning the science of natural and applied electromagnetic fields.

Magnetic therapy is gaining popularity with athletes and celebrities [people who are known to be conscientious about their health] around the world. For example:

"Regular" people like you & me are rapidly discovering the benefits of magnet therapy also!
In a 1999 survey of patients with rheumatoid arthritis, osteoarthritis or fibromyalgia, 18% had used magnets or copper bracelets.